Ukrinform has received from security circles a 7-step algorithm on how to join the force.

Step 1. Contact the Embassy of Ukraine in your country with the intention to join the International Legion of Territorial Defense of Ukraine (reach out to a military attache or consul: contact details are available on the website of our embassies):

Step 2. Get briefed on what documents and gear (equipment) you will require.

Documents: ID or passport (national); passport for foreign travel; documents confirming military service experience (service in law enforcement) and combat experience; other documents on the instructions of a military attache or consul.

Step 3. Report to the embassy with a package of documents for an interview with a defense attaché and for visa clearance – with a consul.

Step 4. Write an application for admission to the territorial defense of the Armed Forces of Ukraine for contracted military service on a voluntary basis (defense attaché provides assistance).

Step 5. Get instructions on how to arrive in Ukraine, the documents and equipment required.

It is recommended that you have on you military uniform or its elements, gear, helmet, body armor, and more, if available.

Step 6. Cross into Ukraine in a designated manner.

Representatives of Ukrainian embassies, consulates (abroad) and territorial defense forces in Ukraine will provide assistance in deployment. Their contacts will be provided at the embassy of Ukraine in your country.

Step 7. Upon arrival at the assembly point in Ukraine, join the Foreign Legion of Territorial Defense of Ukraine (sign a contract) and together with soldiers from other countries and Ukrainian soldiers join the fight against Russian invaders.

As you know, earlier President of Ukraine Volodymyr Zelensky announced the creation of the International Legion of Territorial Defense in Ukraine. The corresponding address by the president pointed out that Ukrainians have courage to defend their homeland, defend Europe, defend the values of civilization. At the same time, it was noted that this is not just Russian invasion of Ukraine, this is the beginning of a war against Europe, basic human rights, and all rules of coexistence on the continent.

President addressed to all citizens of foreign nations who are friends of Ukraine: all those who want to join the defense of security in Europe and all over the world can come and stand side by side with Ukrainians against the XXI century invaders.

According to the Regulations on Military Service with the Armed Forces by Foreigners and Stateless Persons, approved by the Decree by the President of Ukraine of June 10, 2016, No. 248, foreigners have the right to enlist in the Armed Forces on a voluntary basis, including in the Territorial Defense Forces of the AFU.

This will be a key sign of support for Ukraine. 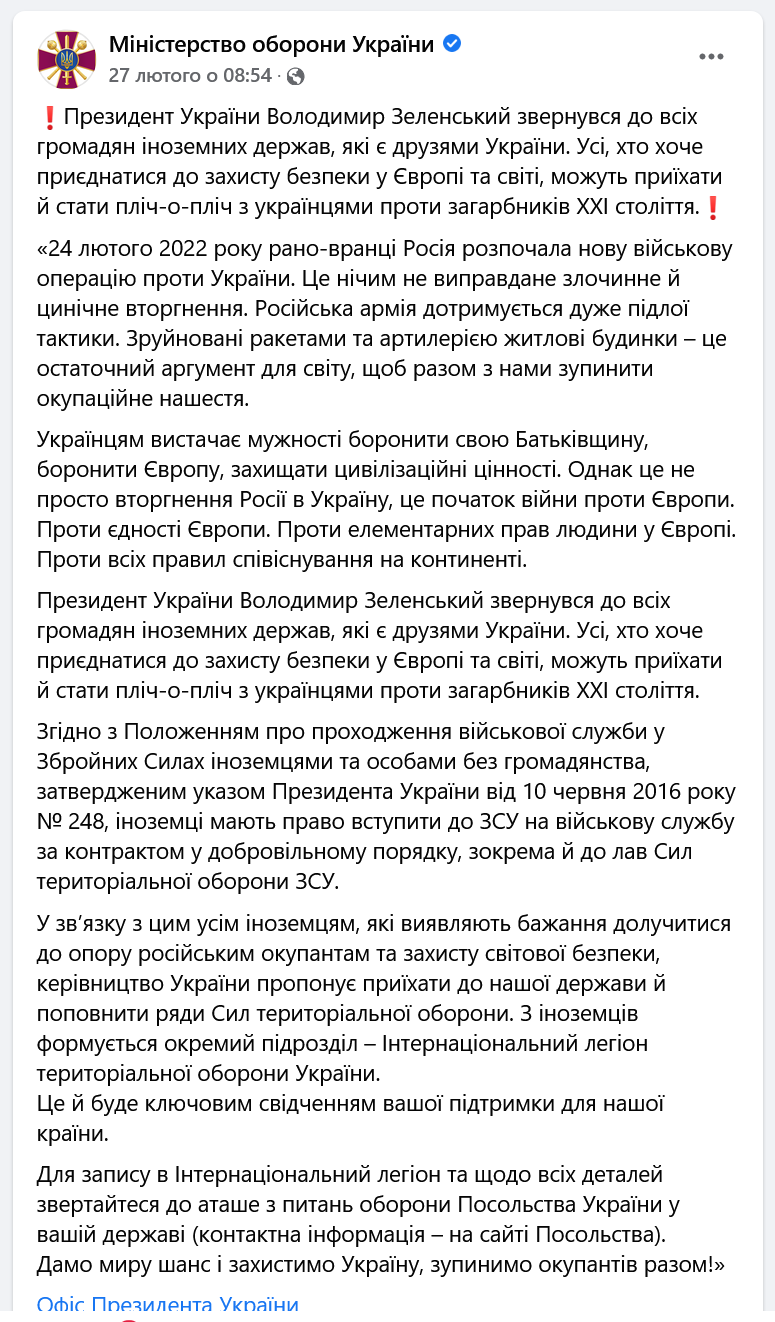